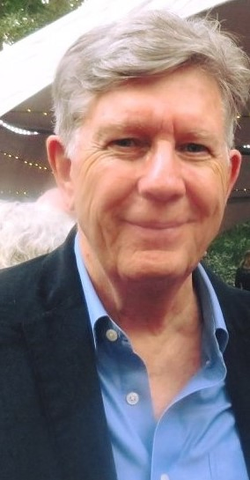 Thrilled and thankful The Audition will premiere at Megafest

Thanks for visiting my web page. Please check out the blogs and the visuals that describe my accomplishments, background and work-in-progress. Very fortunate to have my first short film, The Audition (Bronco's Dolls Go to Hollywood) premiering in the U.S. at the Action on Film Megafest, 16th Annual Film Festival.

The comedy is about art and relationships. SOS (Swans of Stratford) chronicles the journeys to Stratford, Canada by a male searching for true love and the writer's world. It is a fifteen-year journey shared with eight different females. The play incorporates reviews and references to actual productions at Stratford.

The comedy is set in a modern advertising agency. An account executive and his assistant may lose their jobs because the agency lost a major piece of business. A man comes into the agency and requests the agency take his multi-million advertising account. The man resembles a stereotypical accountant but claims he is the devil. The agency must produce a fabulous advertising campaign or else. The play champion's the role of women in religion and pokes fun at  advertising . Illustration by Len Bethel.

Based partially on the lives of two (deceased) and famous outsider artists in the seventies. Love, art, greed and loss evolve around a mid-twenty-year-old, African American, outsider artist in rural Alabama. Panelist Favorite of the late Michael Warren Powell at the Last Frontier Theatre Festival and Runner Up at the Dallas Theatre Festival. Two sequels have been completed, Bone Man and Soul Coat. Will post soon.

Men in a support group share two problems: their inability to sustain healthy relationships with women and frustration with their careers. They purchase a bankrupt radio station in a small Alabama town and convert it to a self-help, talk format. Spousal abuse, anti-Semitism, and gender equality are confronted in the community and that brings down the wrath of the town leaders.

An art savvy DEAF person has an insatiable need to touch art . He scuffles with guards at a museum resulting in the destruction of Van Gogh’s famous Potato Eaters. The play brings to the audience the realization that the members of the deaf community have similarities to members of the hearing community. It is not a pity play for the deaf community. American Sign Language (ASL) is used by the deaf character and by a speaking interpreter in the play.

A madcap spoof of advertising, incorporating ASL (American Sign Language) highlights gender bias, racial inequality and the marketing of esoteric products. Two extraterrestrials who are bored, decide to turn on their terrarium and watch a program, Earth, circa 2020, a day in the life of an advertising executive and his DEAF wife. The play spoofs the monotonous life of commuters, the goings-on inside an ad agency’s creative process. Music transcribed by the  Buffalo Guitar Quartet.

Father and daughter argument over his weekly blog that includes his daughter's declaration that she may be "80 Percent Lesbian."

Comedy. Experimental. A traveling salesman checks into a famous NYC hotel to encounter the ghost of  a famous poet. The two argue over relationships as she responds only in verse (parody).

Some of the Ten Minute Plays

SCABS was originally written as a ten-minute play. It was selected as a finalist at the Humana Festival of Short Plays or Ten-Minute Plays. It was also selected for inclusion for the Last Frontier Theatre Festival but I had to withdraw it because of an assignment in Spain that summer.

Comedy. Recently completed. After a vasectomy, a man takes a prescription to a pharmacy to be filled. The patient thought he was going in for a procedure to help his sore throat . The man doesn't read prescriptions.

Comedy. Recently completed. Three supervisors, two diggers and an overly curious homeowner. Three Anglicans above, two Hispanixs below and if you question city hall, you go to jail. Spanish and English.

Drama. Recently Completed. A devoted husband of 32 years, with no money, desperately tries to obtain pain medicine for his terminally ill wife. It's a fight of love against a bureaucratic and unfair system.

Comedy. Performed 2019 at Tampa Bay Theatre Festival during Hurricane Weekend. Optioned for a short film. A man pretending he is a sports buff tries to pick-up a woman at a bar. She is a sports nut.

Comedy. Performed at Tampa Bay Theatre Festival 2017.  “ If you are familiar with the concept of a “found poem,” you will appreciate Lee Kitchen’s theatrical application of this idea in his clever short, FORTUNE KOOKY. After ten years of visits to Chinese restaurants, 95% of his dialogue is culled from the signature dessert. The story’s premise is simple, but there are immediate escalations and reversals that would make this play fun and challenging for its actors. Looking for a good short play for your festival? “Stop searching forever. Happiness is just next to you.” Greg Burdick, Playwright.

Comedy. Read at the SEC Conference, 2018. An actor still in a Shylock costume, after a performance and on stage, has a debate with an English professor who is writing a paper for his or her doctorate. The two represent reality and theory. Audience engagement.

An inebriated couple in a long-distance relationship party until 2 am. They hail a musician cabbie who drives them home. He’s had weirder passengers but maybe not.

Tenant farmers’ in the Jim Crow era are thrown into a southern  town’s class struggle and prejudice as people in mass hysteria accuse them of murdering a farmer and three family members. A multiple lynching,  the human and inhuman side of people and an unsolved mystery. Based upon true events.

Accepeted as part of the MegaFest Film Festival in Las Vegas 20202. Also the Barcelona Film Festival and Tim Kelly, actor, received a merit award for So You Think You Can Act 2019. A five minute version, the original concept, selected as one of 40 from 3,000 submissions, at the 2018 AT&T Create-A-Thon.

Click on the photographs in Blogs (above) for readings. Don't ask me what it all means. I was twenty-two. Submitted the poems when I was 25 with three published in Writer's Digest and five in the Buffalo News. On of the earlier photographs was accepted by The Sun.

Click on Blog photograph April 2 for reading of the poem. The cockroach is now the therapist. Several of the new narratives or poems or whatever the hell they are, feature therapy sessions with Dr. Misnomer, often about the work or writing created on the opposite page, from many, many years ago.,

On the drawing board

Work in progress: New screenplays (Peyton and Pat's Story) , The Home (comedy, futuristic) Da Do Was's and of course, the Chicken series. Final edits in process for the novel, Long Walk  Back.

to Online With God Paperback on Amazon

"There are so few humorists left. But if you are looking for one, then I can assure that you can find one in Mr.Cucina and his excellent book Online With God (G-Mail} The Ultimate Icon.His e-mails from God to characters ranging from Foghorn Leghorn to Steven Spielberg are guaranteed to cause you to chuckle or smile (the true humorist's  goal). Get it today. I promise you that you will not be disappointed and you will recommended to your friends. "  CV, Amazon Post.

Participated in the Dramatist Guild Song Writer Circle and Master Playwriting class. Have worked with  other lyricists and four composers on four songs.  An incredible learning experience.

Completed new spin off of The Audition titled The Doll Man. It is more GP friendly and hopefully more humorous to a broader audience.

"That short screenplay is the weirdest thing I’ve read in awhile and I mean that as a compliment because it doesn’t seem to be just an exercise of the writer’s mind but just so darn funny and an interesting story.  It is really funky and funny." From nationally recognized novelist and short story writer, April .

SCABS  received Best the Best Short Screenplay Award at the Oaxaca Filmfest in October and the best TV pilot at the Oregon Comedy Film Festival fall,  and at the Atlanta Comedy Festival, July 2018.

into a sixty-minute pilot thanks so much to the outstanding instructors/leaders of the course (Brian Shin, Angela  La Manna and Liz Nord) --veteran  TV writers.

FYI: Chose the name of the website as Leekitchenwriter because  online search for the name, Lee Kitchen, generates a slew of restaurants. Some look quite good.

Recently completed Long Walk Back a novel (creative, non-fiction with emphasis on creative).

Published Online with God as a self-publishing experiment and it is available via Amazon.

Link to Online With God Paperback on Amazon

Please also read the review of Online With God  in the most current issue of the Apalachee Review. See files uploaded on this site.

Are there such things?

I used to take my daughter, Lisa, to Central Park on Sundays. On the return train back to the Bronxville Station (we actually lived in Yonkers, fourth floor walkup) a vendor would walk up and down the aisles. I don't think he had a license. Who knows? He would yell out, "Ice Cream! Ice cream! There will be no more food served on this train."

Some recent awards and acceptances

Most recently, The Audition (Bronco's Dolls Go to Hollywood) selected for the Action on Film MegaFest 16th Annual Film Festival and Writer's Competition this summer in Las Vegas. The festival is still accepting submissions. Also, the half-hour version of The Doll Man (El hombre muñecas ) was included in the Portland Comedy Film Festival.

Illustration from collection of commuting and business characters.

Took me a ride on a commutin' train

everyone looked alike and dressed the same...(More in manuscript, Commutin' Train). Song also used in first play, Terrarium Earth. Fourth-story walkup in Yonkers (Bronxville Station) when I worked for JWT. After six months, I asked for a review and a raise. My supervisor, a tough ex-Marine and brilliant supervisor , when I asked if he had any problems with me, slowly looked up from polishing his shoes and said in his heavy New York accent, "only problem I got is you look like you're thirteen damn years old!"

Scenes from The Audition and poster for The JoJo Mama

Began career at J.Walter Thompson Advertising in New York and Chicago. Joined The Mentholatum Company as Marketing Director and member of the Executive Committee. Obtained MBA from University of Buffalo at nights while working as Marketing Director at the  Mentholatum Company.After receiving my MBA, I left corporate world to write full-time. Worked with the late NYC agent Glen Cowley on humor manuscript, MBA Guidebook.  Negotiating with LIttle Brown for advance when comparable book hit market. Learned a lesson: sent entire manuscript to several publishers a year before signing with agent.

Board member of The Peyton Tuthill Foundation. Provides scholarships to students who have lost a family member to a homicide.   www.peytontuthillfoundation.org